Venus A resembles its original design but colored red and white while still having brown 'hair'. In Mazinger Angels Z, it is redesigned to resemble its Sayaka Yumi's Mazinkaiser counterpart.

A weapon system used by current generation MA robots that deploys weapons from the chest area. While most weapons are missiles, there are other weapons such as fans or even swords.

In addition to the OPM, Venus can use the finger missiles from its original incarnation.

When Venus A used the sacred treasure of the Mu kingdom, it assumed an Egyptian styled form that featured the Eye of Horus on the thighs and falcon-like attached to the chest that can be used as a throwing weapon. The staff it wield also casts rays to attack foes. This forms most powerful attack is the Breast Horus Burn, which fires a flaming bird at an enemy.

A few years after the conclusion of Mazinger Angels, Venus A is redesigned with an appearance more similar to the Mazinkaiser version of Venus. It is able to fly and still features the OPM. 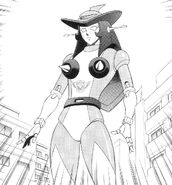