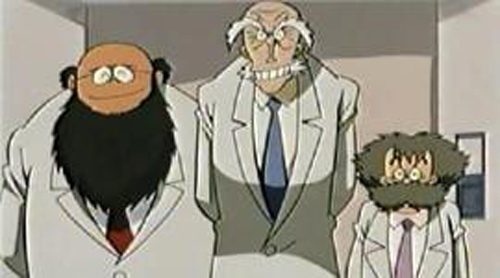 The Three Scientists were a group composed of Dr. Morimori, Sewashi, and Nossori who were originally apprentices under Juzo Kabuto along with Gennosuke Yumi. After Prof. Yumi took over the Photon Power Laboratory, the three scientists decided to work under him and assist in the battle against Dr. Hell.

Dr. Morimori has a broad body and has a slightly different appearance in the manga, wearing glasses and having thicker eyebrows than his anime counterpart who has a differently shaped head and has a beard. Dr. Sewashi is bald with aged white facial hair, standing the tallest of the three, and has oval-shaped glasses. Dr. Nossori is the shortest of the three and has messy gray hair and beard with circular glasses.

The three scientists as a whole are good-natured and patient especially dealing with the hot-blooded teenagers that work in the Photon Lab. They are also rather goofy and serve as part of the comic relief. But the three scientists can be serious when they need to be, especially when under outside pressures. They bowl as a hobby but are extremely bad at it.

All of the three scientists were highly competent in their respective fields. Dr. Morimori specialized in metallurgy and weapons making the Iron Cutter for Mazinger Z, Dr. Sewashi specialized in engine designs, and Dr. Nossori specialized in energy. They were quite capable of improvising under extreme conditions, even when under attack.

The Three Scientists often appeared when assisting the main cast by providing equipment to battle. At one point, Baron Ashura hypnotized them to attack the staff but Shiro managed to knock them out. In episode 79, Dr. Morimori managed to lure some of the Iron Cross Corps into their own minefield trap while dying in the process. His death was mourned by his companions and the rest of the staff.

Retrieved from "https://mazinger.fandom.com/wiki/Three_Scientists?oldid=23412"
Community content is available under CC-BY-SA unless otherwise noted.