Ryo Magami is one of the main protagonists of Mazinkaiser SKL and pilot of the titular robot along with his partner Ken Kaido. With Kaido he makes up the Death Caprice Squad of the Skull Force. His codename is Lucifer 4.

While most of Magami's past is virtually unknown, it is shown he was once a scientist involved in a project for world domination as revealed in the Mazinkaiser SKL Versus manga. The project however failed and Magami was left to wander the world. In the manga he was recruited to pilot the Kaiser along with Kaido having the constitution and will powerful enough to pilot it. In the anime, he met Kaido and teamed up with to become mercenaries where they gained a brutal reputation and titles until they were recruited to pilot the Kaiser and joining the Skull Force.

Magami bears a striking resemblence to Duke Fleed, just with black hair and eyes instead of brown. His skin also had a more pale complexion. At times he wore a type of lab coat over pants and dark shoes (moreso in the manga). Presently he wears the standard uniform of the Skull Force, but with two gun holsters instead of one. At times he wears a gray overcoat over his uniform.

Magami for the most part has a cool yet nihilistic front. In battle, especially with the Kaiser he shows a high degree of excitement (it makes him feel alive). Like Kaido, Magami prefers to fight rather than negotiate and is not afraid of death, but to a much lower degree. When angered he is quite fierce, but that leaves him with openings. Magami absolutely hates his old life, and does what he can to forget about it and angrily attacks anyone who brings up his past. The only thing that can calm him down from this is Kaido and his will to go on with life.

Magami fights with a unique fighting style that uses guns as melee weapons along with with their usual ranged projectiles. His main weapons are a pair of pistols he always carries, which he uses with great accuracy.

After joining the Skull Force with Kaido, Magami is sent on a multitude of missions with him and the Kaiser. Most of the missions involved rogue robots, and giant monsters. Occasionally, they came into conflict with a group lead by a man named Faust.

On one mission to Machine Island, he and Kaido are sent first but their transport is destroyed. They manage to survive and have to fight their way around the locales including Kiba as well as Garan's armies while also in the company of a girl who proved to be more than useful to them.

While still in combat they wait for the Gren Falcon Squad, with only Tsubasa Yuki surviving. They manage to easily hold off the enemy armies like Kiba and Garan. In a fight with Garan himself, he and Himiko find out Magami's past and compared him to them. Magami was furious about this and attacked relentlessly until Ken knocked him out since it was making problems for them and the Kaiser. After falling into a ditch, Ryo meets a phantom of his past self who tells him to keep moving forward. The Squad manages to get out of the ditch and defeat a distracted Garan. However, Kiba is revealed to be alive, and piloting the Iron Kaiser which causes the Gravity Curtain to go out of control. With little choice, but taking a delight to it, the Death Caprice Squad destroy the Iron Kaiser and Gravity Curtain with Kiba with them. With their mission accomplished, they move on to a new one.

The Death Caprice Squad once again get into conflicts with Faust's group with Magami stunned to see one of his clones was working with him. But once the clone casts Faust aside and uses a robot with power comparable to Kaiser, Magami and Kaido decide to go out with Magami finally accepting the past but moving forward destroying the clone and his robot.

'Ryo' is Japanese for distance, referring to his personality and preference of firearms. His codename, is likely based on Satan, the main antagonist of the Devilman manga who was based on the biblical Lucifer, and for most of the manga was partnered to the protagonist. Ryo was also the name of Satan's human disguise, Ryo Asuka. 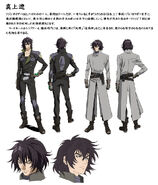 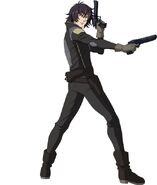