In the recently released Mazinger Z Great Encyclopedia, the storyboards showed a few notable differences between the initial drafts and final product. The Great Mazinger had different attacks like the Great Beam instead of the Breast Burn. There was also a battlefield scene where the American Air Fleet engaged the Warrior Beasts, which was only mentioned in the final film. Koji also has a singing scene as well as embracing Sayaka in a confession before going off to fight.[1]

Dr. Hell and his lieutenants were finally defeated after a long battle. The Mazinger team take a beach day, but then a storm brews in from the intense heat. Boss and his gang see a vision of a prophet who warns them of the Great General of Darkness who will attack the earth from the land, sea, and air to cause the end of the world as people knew it. The only hope for survival was the Mazinger Z.

When Boss and co. tried to tell the others, they were dismissed as hallucinating from the heat. But when music on the radio suddenly turned into an emergency broadcast about bizarre monsters attacking the world's major cities, Boss affirms about what he and his gang saw.

Archduke Gorgon, rejoicing on the destruction sends out Warrior Beasts to attack Japan. Koji pilots the Z to fly to Tokyo to fight the monsters while Sayaka Yumi and Boss pilot Diana A and Boss Borot to protect the Photon Power Laboratory.

As Mazinger Z arrives at Tokyo, he notices how different the Warrior Beasts were compared to the Ghost Mechanical Beast that Gorgon used with Dr. Hell; capable of speech and free will. The Z fought two of the monsters Suruba and Saraga, managing to destroy them both despite the disadvantage in terrain. However, Z suffered heavy damage and is unable to fly back to the lab which is under siege by the remaining Warrior Beasts. Dante had broken through the barrier and easily defeated Diana and Borot. The lab was left defenseless and the personel had to evacuate. Shiro Kabuto however forgot his brother's birthday present and went to get it but is crushed by falling debris.

Koji and the Mazinger are having trouble fighting some of the Warrior Beasts on the way back to the lab. The Mazinger is damaged and Koji is wounded and it looks like he's going to die. Sayaka told Koji over communications that Shiro is in danger, giving Koji the strength to destroy Raigon and Birdian. Koji made it back to the lab now in ruins and Shiro in a severe condition. Koji offers some of his blood for a transfusion in spite of a stock and the fact that Koji a lot of blood, Koji doesn't listen and the transfusion goes through.

The Mazinger Z goes into intensive repairs and Koji and co. are waiting to hear the results of Shiro's condition. The lights turn off and the prophet is heard again announcing the end of the world. Following the voice they come outside where the prophet describes the Great General and the Mycenae armies. When they strike again, the Mazinger will be no more and the world will be in darkness. The prophet vanishes and Gennosuke Yumi recounts that Juzo Kabuto described something similar. Koji goes through his grandfather's notes to find answer.

As Gorgon returns to the underworld base of the Mycenae Empire, the Great General is displeased that some of the best Warrior Beasts were destroyed and sends General Juuma out with some Warrior Beasts to destroy the Mazinger for good.

Prof. Kabuto's notes do indeed tell of the Mycenae Empire, how they've been deep below the surface for thousands of years waiting for the right moment to take over. Prof. Yumi realises that the Mazinger will not be repaired in time as Juuma approaches. Koji, spends time alone looking at some old pictures of his father and grandfather. In tears, Koji vows to fight until the bitter end, even with a damaged Mazinger Z. Sayaka had listened to everything Koji said. Before leaving Koji visits Shiro who manages to wake up. Prof. Yumi tries to stop Koji by pointing out that the blood transfusion has weakened him. Koji refuses to oblige and leaves. At the hangar, Sayaka gives Koji the present Shiro never gave him, wishing him luck and leaves in tears. Koji activates the Mazinger happy to see the morning sun.

Koji manages to destroy Mommothos with a Breast Fire before flying to the other Warrior Beasts but is shot down and overwhelmed by massive forces. Boss Borot manages to help with a couple of Diana's missiles and destroy Dante but is swat back to the institute. The Mazinger is then beaten to a wall. The prophet appears again and is revealed to be Koji's father Kenzo Kabuto, sending out the Great Mazinger to assist his son. As Koji lays unconscious, the present opens revealing a music box that plays as Juuma is about to destroy the Mazinger Z with his axe. Before he can, he is struck by lightning used by the Great Mazinger. The Great manages to effortlessly destroy the Warrior Beasts including one with help from Z after Koji regains consciousness. Working together, the Double Mazingers use their Breast Fire attacks to destroy Juuma. Amongst the flames, the Great General appears and vows to destroy his enemies.

Koji has a brief conversation with the Great's pilot Tetsuya Tsurugi, where Tetsuya says that the Great is the Mazinger's brother and was built to destroy the Mycenae Empire before flying away. Koji stares wondering who could have built the Great.

A manga titled Shin Mazinger ZERO vs. Great General of Darkness serves as a reimagining of the film but with a vastly different take on the events.

Mazinger Z prepare for the fight 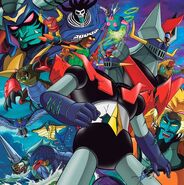 Add a photo to this gallery

Retrieved from "https://mazinger.fandom.com/wiki/Mazinger_Z_vs_Great_General_of_Darkness?oldid=24530"
Community content is available under CC-BY-SA unless otherwise noted.