Mazinger Z is a robot created by Juzo Kabuto and piloted by his grandson, Koji Kabuto. Besides his already incredible power in his base state, Z is capable of becoming even stronger with the help of his seven black boxes system. His potential to wipe out humanity and all of existence is one of the major plot points of Shin Mazinger ZERO and Shin Mazinger ZERO vs. Great General of Darkness.

Mazinger Z mainly takes after his previous incarnations in appearance featuring the same frame and equipment. In the first chapters, the Pilder featured a brain that would allow the Mazinger to move on his own when activated, but after Koji crashes into the craft he literally becomes a part of the brain.

When Mazinger Z assumes his Mazinger ZERO state he assumes a more muscular human-shaped form. The mouth grill turns into a more skeletal-like state with a mouth that can open or close. The eyes also gain noticeable pupils when looked closely, the forearms gain blades attached to them, and the heat sink on the chest becomes sharper. The Jet Scrander on its back also transforms into a large slashed zero symbol on its back that can change forms.

When Dr. Hell as the Emperor of Darkness hijacks Z, the robot assumes a more menacing form known as Mazinger ZERO Jigoku Mode. Aside from the different Pilder, Mazinger changes to a form similar to ZERO but the heat sinks are shaped with the characters for 'Jigoku' (A pun on the pilot's surname) and the Scrander's wings become pure blazing photons.

As a robot made from Super Alloy Z - an alloy far stronger than diamond nanorods - and equipped with a Photonic Energy Engine - an engine that can easily produce a total amount of energy equal to the Sun - for a power source, Mazinger Z is very strong and durable. In Mazinger's initial appearance, he featured a mechanical brain that would have allowed he to move without a pilot before Koji was integrated into it. In the current timeline, he is piloted through the use of a Pilder.

Mazinger Z features a unique system of seven black boxes that hold his hidden power. Each black box allows a new ability and can be utilized by Z's pilot outside of the mecha as seen when Koji is able to use the Prediction of Higher Order. The black boxes are:

The hovercraft-like command center for Mazinger Z. In its initial appearance, it possessed a mechanical brain. In the current timeline, it serves as a mode of transportation through VTOL fans on the wings. While it is built for one person, several people have entered the aircraft on more than one occasion.

A winged attachment to the Mazinger Z to allow the mecha to fly. It can also be served as a weapon for close and long-ranged combat. Through the power of the Metamorphosis Black Box, it is able to assume different forms such as a larger wingspan and shape.

Mazinger Z features several of the same attacks as the other interpretations of the Z, including attacks that were originally only featured in the anime through some of the black boxes such as the Reinforced Rocket Punch through the Strengthening Black Box.

A transformation caused by reaching the 7th Black Box, Majin Change. In this state, the pilot becomes attached to some of the wires and circuitry which enter their body, becoming a part of Mazinger. Through the use of the Metamorphosis black box, the blades on Z's body can be used for various close combat attacks. In this form, Mazinger gains a great increase in power, enough to destroy an entire planet. However, the pilot and robot enter a frenzied rage causing them to destroy anything in sight until nothing is left.

ZERO possesses a sentient artificial intelligence that merges with his pilot's, allowing him to move without one and even have a personality. ZERO desires to be the only super robot in existence and the presence of another Mazinger is one of the things that can set it off as he desires the destruction of any 'rival' above all else. Due to the link between the pilot and Z, if any of the pilots possess a state of madness ZERO will be activated.

After consuming multiple timelines, ZERO had managed to become an independent entity no longer held back by a pilot or even a reality. In this state, he possesses enough power to influence other realities where he is the only Mazinger or super robot in all of existence. The only threat to ZERO however was his main pilot, Koji Kabuto who was influenced by the changing timelines and is able to indirectly control the Reality Manipulation Black Box.

Jigoku Mode is an alternate form of Mazinger ZERO assumed when Dr. Hell as the Emperor of Darkness hijacks Mazinger Z. Like its original form, this form uses all seven of the Mazin Power black boxes empowering Mazinger to a nearly unstoppable form. However, with Dr. Hell serving as the control unit, this form is much more vicious and the image it presents is terrifying. Instead of a scrander, Jigoku Mode uses wings made of Photonic Energy. This form also utilizes metal tentacles like the kind used by Juzo Kabuto in certain timelines. As Dr. Hell is in control, he is able to use his Kikaido Karate style boosting it to new levels such as being able to bisect part of the earth and the moon in one blow.

Mazinger Z was created by Juzo Kabuto to become an actual being with the power of a god or a devil. After years and effort including through the use of time travel via Photon Connect and Minerva X, Juzo had completed prototypes in the form of Energer Z and Iron Z and eventually complete Mazinger Z in a single night. Juzo would use the Mazinger Z to conquer the world and further his research by sending Minerva back in time where Minerva and Z would be constantly improved upon. At one point, Dr. Kabuto had created Z with a sentient artificial intelligence and the completed Mazin Power system. However, Dr. Kabuto's influence caused Z to crush his creator and destroy the entire planet. Minerva would try nearly 2,700 times to stop Z from becoming this demon of destruction called ZERO.

At the start of the manga, the Mazinger Z is seen within its Majin state after humanity is wiped out. Its former pilot Koji Kabuto, is the only survivor and wishes to stop the carnage. He is approached by Minerva X who destroys his body with Rust Hurricane to have his soul transport to an altered past. Unfortunately, the Mazinger Z of this timeline also changed into its Majin state after Koji is involuntarily integrated into its Mechanical Brain and going mad with grief after Sayaka Yumi is killed by his own grandfather, who previously killed his father.

After the world and all of existence are destroyed, Koji's soul is transported again to another timeline, the Mazinger is under his control and is fighting alongside Sayaka and her Aphrodite A. Battling against Dr. Hell and his legions of Mechanical Beasts, Minerva X joins the group after defecting from Dr. Hell. Prior to this, it was revealed to have been received as a gift by a more benevolent Juzo Kabuto and fought against the Mechanical Beasts attacking Japan before it participated in the Mazin War that ended with many members of the Mazinger Army destroyed but Dr. Hell's forces were held back enough to hold a barrier around Japan's Kanto region.

After some time fighting against the Underground Empire who managed to break through the barrier, Koji begins to manifest some of the Black Boxes that hold the power of the Mazinger Z, but also brings it closer to its Majin state. Minerva warns Koji of this when his memories of his alternate selves begin to surface. Doing his best to make sure that Mazinger Z does not become the "devil of destruction" as told by his grandfather, Koji has the Mazinger face off in a battle against Dr. Hell's forces even after a repeat in the timeline. In a final battle against Gordon Hell, the Mazinger is at a big disadvantage until the sixth Black Box activates and receives help from his fallen counterparts and their Mazinger Zs in order to use a barrage of Rocket Punches and finally, Dynamic Fire Nova to destroy it.

But the battle was far from over, with Dr. Hell's fall came to the rise of the Mycenae Empire, and the Warrior Beasts attacked. Bringing the Z out for battle again, Koji does what he can to win without using the Black Boxes but even as he manages to overpower some of the Mechanical Beasts, more of them appear and the battle looks lost until the arrival of the Great Mazinger piloted by another world's Kenzo Kabuto. The Mazinger was put into the Photon Lab for safety after instructions from Dr. Kabuto, but when the Warrior Beasts prove more than a match for the Lab's defenses, the Mazinger fights back only to be pinned down from an ultrasonic attack that breaks apart from its Super Alloy Z body.

The Great Mazinger piloted by Tetsuya Tsurugi appears to fight when the Great General of Darkness comes into battle. During the battle, Z resonates with the power of the Great which activates the seventh Black Box. As the Mazinger ZERO, it easily overpowers the Great General. But it later goes on to attack Great Mazinger which assumes its more powerful Great Mazinkaiser form. In a deadly battle against the Great, Minerva attempts to get both Koji and Mazinger out of the trance but as the battle raged, Tetsuya had the Great Kaiser take out the Pilder while Minerva used her Rust Hurricane to repeat the timeline again.

In the new reality, Mazinger and Koji had disappeared. Koji reappears later under secret surveillance by the Fleed siblings fearing the power of the Mazinger Z. Z was revealed to have been sealed in a subspace where the Mycenae Empire thrives and Dr. Hell had survived the battle and took over the empire as the Emperor of Darkness. While Koji manages to release Mazinger and fight Dr. Hell in the form of the Great Marshall of Hell, Tetsuya and Great grapple against the Great General of Darkness.

When it seems like Z had won against Hell, the menacing leader of the empire caused the Mazinger Z to eject Koji's Pilder and Dr. Hell had even managed to hijack Mazinger through his own Pilder revealing that he and Juzo Kabuto coincidentally have the same DNA and that he's more righteous to control Mazinger than Koji. With Mazinger Z becoming Mazinger ZERO Jigoku Mode, it easily defeated Great and destroyed Earth. With yet another bad turn of events, Koji's body is once again destroyed by Minerva to travel to a new reality.

Subsequent realities had Koji try to keep Z from activating to prevent ZERO's awakening, but ZERO had already harnessed enough power to exist as its own entity outside of time and space. Koji along with a base Z, Tetsuya, and the Great Mazinger confront ZERO in the void where ZERO dwells. ZERO is too great for both of the Mazinger Brothers so they use Photonic Energy to call upon help in the form of phantoms of other mecha. With enough damage, Mazinger Z delivers the final blow to ZERO who accepts his influence on other worlds causing an event horizon that recreates the universe. 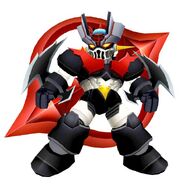 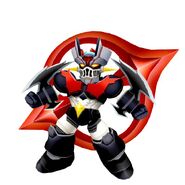 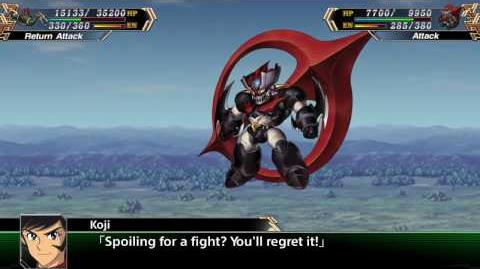 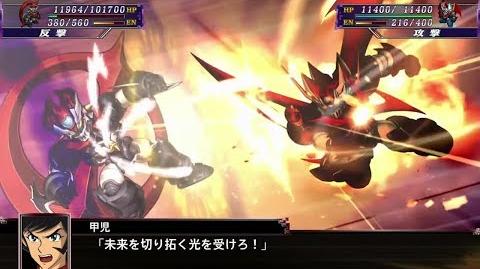 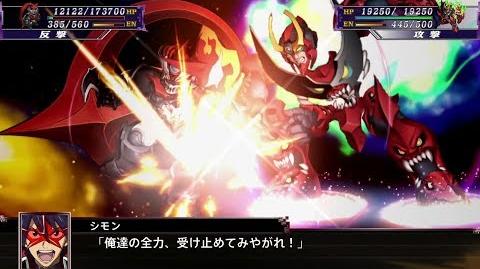