UFO Robot Grendizer Episode 49, I Saw My Big Brother In The Crimson Sunset!

Maria Grace Fleed is the princess of Planet Fleed and the younger sister of Duke Fleed. Initially introduced as a vengeful character after the death of her guardian, she becomes one of Duke's main allies in the fight against the Vegan Empire. Starting in episode 49 onwards, Maria appeared in every episode.

When the Vegan Empire attacked Planet Fleed, Maria was separated from her brother and got put into an escape pod with a servant of the royal family. Like her brother, Maria came to Earth but she suffered amnesia so the servant had raised Maria like a granddaughter. Maria was since raised by him under the cover of an average Earth human.

Maria is an attractive girl that stands slightly taller than most girls her age with bright maroon hair and blue eyes. Her clothing at first consisted of skin tight suits until changing to skirts and loose dresses. She also has pink eye-liner near the openings on her eyes. Her pilot suit is mainly colored red with yellow outlines, a black collar area and belt, white gloves and long boots, and a red helmet with a white crest and clear visor.

Like many female protagonists of the Mazinger metaseries, Maria is tomboyish and hot-tempered. When her guardian dies in an accident while revealing to Maria who she really is; Maria wanted nothing more than revenge for his death and for what the Vegan Empire did to Planet Fleed, thinking they stole Grendizer and Duke was part of the Empire. Later when she finds out who Duke really is, she calms down and begins to socialize with her brother and his friends while shifting her fury towards the empire. Yet she is not afraid to flaunt her status as a princess with others, especially Koji. At the same time however, she does not like getting special treatment for being a royal, shown especially in the way she dresses.

Duke is Maria's older brother, but during their first meeting on Earth she did not recall him due to her faulty memory. In fact, Maria wanted revenge on Duke for the accident caused in a fight between the Grendizer and a Saucer Beast; using a ship to attack the robot mercilessly. When they reveal their necklaces, the siblings recall their relationship. Maria was overjoyed of the fact that her brother was still alive and joined him in the fight against the Vegan Empire.

When Maria met Koji, she tried to kill him as he was in league with Duke. Later after Maria regained her memories, she became friends with him while occasionally arguing with him; even gaining a romantic interest in Koji. Her relationship with Koji mirrors Koji with his girlfriend, Sayaka Yumi (who is not present in Grendizer).

Another of Duke's allies, Maria became friends with Hikaru after she joined Duke's group of allies, though is unaware of Hikaru's feelings towards her brother.

Maria possesses some precognitive ability that grants her knowledge of an enemy's attack, which she can react to. In terms of combat, she at least is able to use a blaster she took off a Vegan and a saber. In addition, Maria has proved to be an exceptional pilot; using a stolen Vegan ship with ease, driving an off road motorcycle, and piloting the Drill Spazer with skills on par with Koji and Hikaru.

Maria was introduced as just an average girl living with her 'grandfather' until an attack by a Saucer Beast. The Grendizer appeared to fight it but during the struggle, Maria's guardian pushed her out of the way of the rubble. With his dying breath, her guardian revealed Maria's identity as the princess of Planet Fleed and the Vegan Empire while revealing that the Grendizer was stolen asking Maria to retrieve it (unaware that Duke stole it back). Maria, blaming the thought to be stolen Grendizer for her guardian's death; Maria swore vengeance on its pilot in order to reclaim her homeland's last legacy. Using a stolen Vegan Empire ship, Maria attacks Grendizer. When brought down to the ground after a battle, Duke encounters Maria face to face and notices a locket she is wearing. Duke brings out his own locket and they recognize each other as siblings. Maria embraces her brother and hears his story. With this Maria joins her brother in the fight against the Vegan Empire providing support with the Drill Spazer until the final battle. With the empire's defeat, Maria leaves with her brother to restore Planet Fleed. 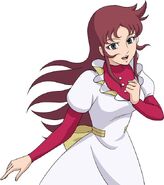