This page describes the Koji Kabuto seen in the Dynamic Productions television series. For other versions of the character, see Koji Kabuto (Disambiguation).

Koji Kabuto (兜 甲児 Kabuto Kōji) is the main protagonist of Mazinger Z and the primary pilot of the titular robot, as well as a supporting protagonist in Great Mazinger and Grendizer. Along with the Mazinger, Koji is famed for breaking the mold of main characters of the time, being hot-blooded and confident to the point of arrogance rather than heroic and/or conflicted.

Koji is a teenager of average height with an athletic build, black eyes, broad eyebrows, and black spiked hair that is combed back along with forward facing sideburns.

Koji is the son of Kenzo Kabuto and an unknown mother, as well as the grandson of Juzo Kabuto. His parents were thought to have been killed in a laboratory experiment that went wrong so Juzo took in Koji and his younger brother Shiro Kabuto. However, when Juzo started to obsessively work on a secret project, a housekeeper name Rumi was hired to take care of them. By the time Koji got into high school he usually spent his time on a motorcycle than anything else.

Compared to most characters in manga and anime during the 1970's Koji is hot-blooded, impulsive, bratty, reckless, and usually over-confident. Believing he can beat anyone with the Mazinger, he often got himself into trouble several times during the fights against Dr. Hell, which often got him into several arguments with Sayaka. This also extends to his belief in road safety, often narrowly avoiding a stop light through motorcycle stunts. Initially he was very cocky, rude, and sexist; on one occasion, he stuffed a plate of food Sayaka made for him down her bra after criticizing it. Overtime, Koji showed growth by fighting enemies more equally and never giving up even when near death. He possesses a strong will, never backing down from a challenge even when the Mazinger is badly beaten and can no longer fight.

Beneath this hot-blooded exterior is a compassionate side Koji usually only shows to his loved ones. As his grandfather became too busy to take care of him and Shiro, Koji became the parental figure of his family; becoming very protective of Shiro after Juzo's death as Koji believed that Shiro was the only family he had left. He is also protective of Sayaka, wanting her not to go into battle without him. However, he usually sounds sexist while saying this which gets them both into a heated argument. Nonetheless Koji cares about Sayaka and will do anything to protect her.

Koji's most famous trait was calling the names of the Mazinger's attacks, occasionally even doing the movements the Mazinger makes to execute them. This is mainly Go Nagai's way of bringing robot and pilot together as one.

Koji cares deeply about his family with the death of his parents and the eventual estrangement between him and Juzo. However, Koji still loved his grandfather and keeps the Mazinger Z as a precious memento of him. With Juzo's death Koji became determined to avenge his grandfather by fighting Dr. Hell and his Mechanical Beasts. With Shiro being Koji's only living blood relative, he became very protective of his little brother; not wanting Shiro to get involved in any fights with Dr. Hell. He also encourages Shiro to take risks including his crush on Lorelai. In Great Mazinger, Koji reunites with his father who everyone believed was dead which brought relief to Koji, but the reunion was short lived when Kenzo died in an attack by Great Marshall Hell. Koji also bonded with Kenzo's adopted son Tetsuya Tsurugi, especially after their father's death.

Koji's main love interest is his partner and girlfriend Sayaka Yumi. For most of the series, they argue over each other's attitude with Koji believing that Sayaka cannot handle herself because Sayaka was a girl and Sayaka seeing Koji's recklessness being a nuisance. Koji even stopped being a pilot for a while after an argument with Sayaka. However, they do genuinely care about each other. Koji never wants Sayaka to fight alone against the Mechanical Beasts fearing for her safety, although when he tries to explain this he occasionally sounds sexist which results in physical abuse from Sayaka. However, he was rather oblivious whenever Sayaka showed him any genuine affection which was often met retaliation.

While Koji loves Sayaka, other girls often catch his eye such as Boss's cousin Misato (much to Sayaka's irritation). In Grendizer (where Sayaka is nowhere to be seen) Koji expresses interest in Hikaru Makiba after she shows her piloting skills. But Hikaru loves Koji's friend Duke Fleed and prefers to be just friends with Koji. Duke's younger sister Maria Fleed falls in love with Koji and it is somewhat hinted that he is attracted to her even though they never stop arguing. Their relationship is very similar to that of the one Koji has with Sayaka including his obliviousness to her feelings.

While Koji mainly sees Boss and his gang as a nuisance, they become good friends as the series moves on. He also becomes good friends with Duke Fleed, even after it is revealed that he is an alien and the crown prince from Planet Fleed. He also joins Duke in battle against the Vegan forces, even though his vehicles and mechs have much lower power than Duke's Grendizer.

Koji began his adventures when he heard an explosion in his grandfather's laboratory. With his grandfather barely alive when he finds him, Koji tries to help Juzo but the professor told him it was pointless and instead showed Koji his secret project, Mazinger Z. Juzo explained to Koji why he created the Mazinger, in the anime he also spoke about Dr. Hell and died leaving everything up to Koji. Koji, saddened by his grandfather's death piloted the Mazinger to battle a recently appeared Mechanical Beast. He explains everything that happened to Sayaka, her father Gennosuke Yumi, and Shiro after this and they agree to help Koji though Koji argues with Sayaka about joining in the battle.

One after another, Dr. Hell sends Mechanical Beasts to attack Japan with the Mazinger fighting and defeating them with assistance from Sayaka and her mechs. Once Koji and company encountered a mech originally designed by Juzo but created by Dr. Hell, Minerva X which although neither enemy nor ally showed attraction to the Mazinger. However she was destroyed by Hell's orders for its disobedience. With some parts of it still remaining, Koji had the Mazinger use its Rust Hurricane to honor the living mech.

In one fight with a Mechanical Beast, Koji is injured and in a coma with Sayaka trying to pilot the Mazinger but like Koji on his first try, it went on a rampage. Koji woke up and helped Sayaka get it under control. Eventually, all of the Mechanical Beasts have run out and Koji and co. take the fight to Dr. Hell's island fortress. It is here that Koji finally avenges his grandfather by having the Mazinger destroy the island and Hell's flying fortress. But although Dr. Hell was defeated, the Mycenae Empire started its attack. With the Mazinger still recovering from the last battle with Dr. Hell, it could not put up much of a fight for the gigantic Mycenae generals. With little repairs to effectively fight the invading empire, Koji decides to fight until the end while saying his goodbyes to his friends. In a fight with the Great General of Darkness, before he is dealt the finishing blow Koji is saved by the Great Mazinger and it's pilot Tetsuya Tsurugi.

Leaving Japan in the hands of Tetsuya and his partner: Jun Hono, Koji and Sayaka travel to America to repair a Mazinger and study space travel. By the time Dr. Hell returns as the new Generalissimo of the Mycenae Empire with the defeat of the Great General of Darkness; Koji returns with a stronger Mazinger and reunites with his father Kenzo Kabuto. Indeed, Koji begins to meet his father again, and Tetsuya becomes jealous of the attention Koji is receiving from him. Finally, Kenzo is killed by the Marshal of Hell; Koji and Tetsuya begins the final assault on the Mycenae Empire. Hell is finally defeated forever with the teamwork of Mazinger Z and Great Mazinger.

Having retired from fighting with the Mazinger, Koji had spent his time creating the TFO and establishing contact with extraterrestrial life. Having come back from NASA, he tries to make contact with an alien force despite warnings from a ranch worker and adopted son of one of the Space Science Center scientists, Daisuke Umon. However, the alien force was the Vegan Empire, and took Koji hostage. Daisuke saves Koji revealing his true identity as Prince Duke Fleed with the Super Robot the Grendizer. Koji decides to work together with Duke with further assistance from Hikaru Makiba and Duke's sister Maria Fleed. In the anime movie, Koji is brainwashed and fights Duke in the Great Mazinger until it was deactivated. By the final battle, Duke and his allies fight against the Vegan force, destroying them with Duke and Maria saying their goodbyes to their friends. Koji is assumed to have returned to the Space Science Center to continue finding intelligent life.

At the start of the series, Koji's only special skill was motorcycle driving. His skill was often shown to be very above average, often using high-risk stunts and always escaped unscathed. Finding the Mazinger Z and going through several battles, Koji became a top-class pilot. Even when piloting the Great Mazinger, Koji demonstrated finesse as much as its predecessor. He has shown to pilot almost any vehicle including the Spazers.

Koji fights in an unorthodox fighting style, mainly focusing on dealing with and hitting opponents in sensitive areas. He is able to stay in a fight, even against armed opponents.

Koji originally gained a pilot suit for his protection when piloting the Mazinger. It is made with Super Alloy Z which offers great defense from conventional weaponry. It also has a holster for a Photon Gun that can be used to attack enemies with Koji in some circumstances able to use it with pinpoint accuracy. The helmet is shaped after the Photonic Research Lab.

In Grendizer, Koji is given a new pilot suit, compared to the original black and red costume, this one is blue and has a mouthpiece.

At the start of the series, Koji's brashness presided over everything including strategy and sometimes even common sense. He does not appear to be good at studying as shown in the original series where his teacher had concerns for his grades. Over time, he becomes more intelligent, thinking of good and accurate strategies including disabling Mechanical Beasts that have hostages, often on the fly. By Grendizer, he has created his own hovering vehicle.

Kabuto is Japanese for 'Helmet' which fits Koji's role as the Mazinger Z's pilot as he docks a vehicle on top of the mech's head. 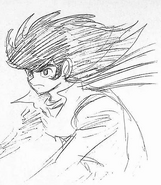