For other characters with the same name, see Koji Kabuto (Disambiguation).

Koji Kabuto (兜 甲児 Kabuto Kōji) is the main protagonist of the Mazinkaiser OVA and manga. Initially, he piloted the Kaiser reality version of the Mazinger Z, before it was stolen by Baron Ashura and was subsequently damaged by his new robot, Mazinkaiser. With the Kaiser, Koji and his allies battle against Dr. Hell's Mechanical Beasts and his right-hand Baron Ashura.

Koji's physical appearance is the same as his manga and anime counterpart, though he appears to have brown eyes instead of black eyes.

Like several other versions of Koji, he is hot-blooded, courageous, and has a strong will; never backing down from a challenge or threat no matter what the danger whether a swarm of attacking Mechanical Beasts or the Gamia Q assassins which causes other people to worry for him. Koji takes pride in his grandfather's robots, refusing to abandon the Mazinger Z or let the Mazinkaiser become a tool for evil. He is very confident in Kaiser, believing he is invincible with the mecha. To sum it up, he is a good intentioned person who believes in justice, is a bit reckless, and is caring towards his friends and family.

Sayaka is easily the closest person towards Koji besides his brother Shiro. Whenever Sayaka is in danger, Koji never wants her to get hurt or humiliated, always surrendering himself to ensure her safety and tries to keep Sayaka from getting into dangerous situations. He also does not want to upset Sayaka, complementing on the gift she was going to give to her father rather than pointing out the fact it resembled Baron Ashura's wardrobe. While Koji is devoted to Sayaka, other girls like Lori and Loru catch his eye, something that Sayaka berates Koji for.

Boss is a close ally and friend to Koji when Boss is not boasting about himself or when not trying to attract Sayaka. Koji usually likes to tease Boss about the screw-ups he gets himself into. In spite of this, Koji thanks Boss for the support he gives.

Koji sees Tetsuya as his strongest ally and someone he can depend on in battle. While Koji expresses his concern for Tetsuya, Tetsuya tells Koji not to worry and go do the more important subject.

Koji is a skilled pilot, effortless piloting several vehicles like motorcycles and aircrafts with finesse and skill. He is also a skilled fighter, able to defeat a Gamia Q without special equipment and knock out a few Iron Masks with only his fists. His biggest ability is piloting robots to their absolute limit, and using their attacks strategically in combat.

Koji at some point gained the Mazinger Z which he used in battle against Dr. Hell and his Mechanical Beasts. In one such battle, he was piloting the Mazinger Z with help from the Great Mazinger as well as the Aphrodite A and Boss Borot. When reinforcements appeared, Professor Yumi advised Koji to retreat even if it meant leaving behind the Mazinger. Koji refused before the Hover Pilder ejected and went off out of sight. Koji had no control of the vehicle and was lead to a secret laboratory. Upon going inside he encounters a hologram of his grandfather Juzo Kabuto who explained that he created the Mazinkaiser.

After the hologram disappeared, Koji found the Mazinkaiser and its Pilder. After boarding the Pilder and docking onto the Mazinkaiser, Koji attempted to control the giant robot but lost consciousness and the Kaiser destroyed anything in its path including the transformed Mazinger, Ashura Mazinger and wrecking part of the Photon Power Laboratory. Before any more damage could be done Sayaka and Tetsuya manage to snap him out of the trance to stop the Kaiser before losing conscious again.

Koji wakes up in the lab's infirmary where Sayaka hugs him before being interrupted by Shiro and Boss. After coming to, Koji explains what happened to everyone before Baron Ashura attacked again with more Mechanical Beasts. With Aphrodite and Sayaka taken hostage, Ashura demands that Koji surrenders the Kaiser. Koji does so after Aphrodite is torn apart before the Great Mazinger frees Sayaka and destroys some of the Mechanical Beast with Koji destroying the rest of the Mechanical Beasts and Ashura's ship, the Gool. As Tetsuya leaves with Jun due to his injuries, he encourages Koji to get better with the Mazinkaiser.

As Koji trains with the Mazinkaiser, he tackles threats sent by Dr. Hell and Baron Ashura such as the Gamia Q assassins that almost killed Boss and Sayaka getting kidnapped on their beach day. With wits, skills, and help from his friends and the Kaiser, Koji manages to turn the tables on these plans. Also with the introduction of Lori & Loru, Koji attempts to get close to them (much to Sayaka's annoyance).

During Professor Yumi's birthday, Koji notices something is off about the professor before finding out from Loru that he is an impostor. Before the disguised Baron Ashura could detonate explosives, Koji attacks him/her. As the rest of the Lab's staff arrives, Koji has the Kaiser fend off the Toros D7 before they are attacked by Dr. Hell's Ghost Mechanical Beast.

Recovering from their last encounter, Koji has the Kaiser destroy the Mechanical Beast. Unfortunately, the Drago Ω1 left its mark on the Venus A, which infected it with a parasite that caused to change into a gorgon-like Mechanical Beast. As more Ghost Mechanical Beasts arrived, Koji tried to fend them all off with the Kaiser with some help from Boss Borot before a composite Mechanical Beast combining attributes of the Garada K7 and the Doublas M2 came and tossed the Kaiser into a now active Mt. Fuji.

When all seemed lost, Jun and Tetsuya arrived with equipment from Prof. Kabuto's hidden lab including the Kaiser Scrander that allowed the Kaiser to fly out of the volcano. As Koji fights against some of the Mechanical Beasts he travels to Dr. Hell's Hell Castle to fight against Dr. Hell. Upon arriving he encounters Baron Ashura and some of the Iron Masks as the Hell King Gordon. Its overwhelming size and power left Koji at a big disadvantage but the central panel revealed a mysterious hermit who told Koji to unleash to full power of the Mazinaiser. Koji had the Kaiser pull out the Kaiser Blade which it used to fight against Hell King Gordon. The odds now even, Koji had the Kaiser destroy the Gordon by cutting the monster into pieces before it exploded.

Koji then goes to confront Dr. Hell who congratulates Koji for his efforts and tries to convince Koji to join him. Naturally, Koji refuses and Dr. Hell tried to escape before the Hell Castle exploded. Koji boarded the Kaiser and with the Kaiser Scrander to help it take flight, Koji flew back to the Photon Power Laboratory where his friends were waiting. 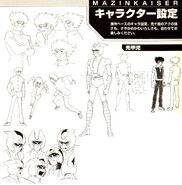 Beach Lineart
Add a photo to this gallery
Retrieved from "https://mazinger.fandom.com/wiki/Koji_Kabuto_(Kaiser)?oldid=24448"
Community content is available under CC-BY-SA unless otherwise noted.