Dr. Kenzo Kabuto (兜 剣造 Kabuto Kenzō) is the son of Juzo Kabuto, father of Koji and Shiro Kabuto and legal guardian of Tetsuya Tsurugi and Jun Hono. He was assumed to have died from a laboratory accident.

Kenzo was actually hiding in anticipation for the Mycenae Empire's attack. He made several preparations for the upcoming threat, such as building the Science Fortress Laboratory, Great Mazinger and Venus A besides training both Tetsuya and Jun.

At some point, Kenzo had married and fathered his sons Koji and Shiro. Working with his wife and father on a project in a lab, there was an accident that Juzo caused. Juzo revived his son by making Kenzo into a cyborg. Unable to face his nuclear family in his current state, Kenzo went into hiding while Juzo would look after his family. At some point, he learned of the Mycenae Empire; taking in two orphans: Tetsuya Tsurugi and Jun Hono to train them to confront the threat. Using his father's schematics of the Mazinger Z; Kenzo improved on the design to create the Great Mazinger.

Kenzo is a middle-aged man bearing some features similar to his sons including sideburns and facial structures. He had short but well kept black hair, a finely trimmed mustache and goatee, a broad nose, a scar on the left side of his face that goes to his eyebrow, and black eyes. He is always dressed in a white lab coat with dark pants and shoes that covers most of his cybernetic body with the exception of his hands.

Kenzo is a good natured man dedicated to stop the threat of the Mycenae Empire. He puts great value on human life and is willing to sacrifice himself and even give away Great Mazinger to prevent innocent people from being harmed.[2][3][4] The Director hopes to bring an end to the war with the Mycenae Empire and create a future where humanity lives in peace.

He is rather secretive, not coming onto the surface unless the need is high. His insecurities over being part machine are likely one of the reasons for his attitude. He kept his identity as father of Shiro and Koji a secret from the two to protect them from the psychological shock of having their father come back to life as a cyborg. Not even Tetsuya and Jun were aware of the truth until much later[5], however, they did harbor suspicion from the very beguinning.[6]

His fears turned out to be unfounded as his children didn't seem to mind the truth. However, while angry with Kenzo, Shiro once did accuse his father of being too cold as a result of being a machine which seem to have succeed in hurting Kenzo at some level.[7]

Kenzo was also shown to be rather susceptible to Shiro's requests. This is exemplified when he's unable to say no to him when he asks for a robot to pilot. The scientists ends up building Robot Junior to please the boy, and admits he wouldn't have complied if it wasn't his own son asking for the machine.[8] It's somewhat implied he extended the same treatment to Koji as he seems to favour his strategy over Tetsuya's, but it's unclear if the decision was truly a resulf of bias or just perceived as such by Tetsuya's skewed perception.[9]

Kenzo has a great respect and gratitude for his late father both for bringing Kenzo back from the brink of death and for looking after his family while he was in hiding.

His relationship with his son suffered when the child learned he had been hiding the fact that he was alive. After the rocky start, the two of them become very close to each other. Kenzo tries his best to make his son happy by attending some of his requests, like building Robot Junior[8] and taking a vacation from his role as director of the Science Fortress Laboratory to spend time together with Shiro.[10] Even so, Kenzo doesn't shy away from scolding his son when the situation calls for it.

They have a father-son relationship. Kenzo is shown to care deeply about Tetsuya's well being. When Tetsuya came back heartbroken after losing Great Mazinger to the Great Marshall of Hell, he begged to be forgiven for his inability to prevent the robot from being stolen only for Kenzo to comfort him and reassure that the machine would be recovered soon.[11] Similarly, when Tetsuya lost his fighting spirit after suffering a crushing defeat at the hands of Warrior Beast Sorgus, Kenzo offered to pilot Great Mazinger in his place to spare the younger man from facing the beast again.[12]

As a comander, Kenzo is fairly tolerant of Tetsuya's impulsive behaviour.

Their relationship appears to have been different at some point. While telling Shiro about his past with Dr. Kabuto, Tetsuya mentions he used to hate Kenzo for submitting him to such a harsh traininig. In the flashback depicting the training, Kenzo is way harsher with Tetsuya than he ever was during the series suggesting he may have mellowed down with time. [13]

Kenzo and Jun share a father-daughter relationship. She seems to deeply respect him as Jun rarely disobeys his orders or gives him trouble. When Tetsuya brags about growing up without a father and turning out alright in front of Kenzo, she berates him for not giving proper recognition to Dr. Kabuto who raised them as his own children.[14]

They share a father-daughter relationship and do their best to support each other. Jun provided Kenzo with words of encouragement when his relationship with Shiro takes a turn for the worse.[5] For his part, Kenzo tried to give her support when he realized something was wrong with her.[15] However, as Jun tried to convince him it wasn't anything serious, he decided to respect her boundaries and not pry further. At the time, she was feeling deeply saddned over her mixed origins and thought Kenzo, as a man, wouldn't be able to understand her insecurities over her own appearance.

After Kenzo dies, Jun takes his body to the Photon Power Laboratory and mourns him before vowing to take revenge against the Mycenae Empire.

With Koji being absent from most of Great Mazinger, the two don't have much opportunity to be together. However, as soon as Koji returns from America the two of them are shown to be happy to be reunited. Unlike Shiro, Koji doesn resent his father for hiding the fact he was still alive for so long.

Their closeness ends up making Tetsuya jealous which then compromises his teamwork with Koji. Because of his late deployment, Tetsuya's ambushed and needs to be rescued by Kenzo who gets fatally wounded in the process. As he lay dying, Kenzo asks Koji to be kind to everyone.

After Tetsuya defeats the Warrior Beasts attacking the Photon Power Laboratory, Kenzo invites the Mazinger Team to the Science Fortress Laboratory where Koji was taken to receive treatment for his injuries. There, Kenzo asks Dr. Yumi to met him alone as he doesn't want to reveal himself to his children yet. When questioned about his survival, Dr. Kabuto reveals to Gennosuke he was ressurected as a cyborg by his father and had been living in hidding ever since.

The two of them agree to leave the battle effort to the Science Fortress Laboratory while the Photon Power Laboratory researches peaceful aplications of photon energy. Koji and Sayaka are sent to America to further their studies leaving Tetsuya, Jun and their robots to take their places as Japan's main protectors.

Kenzo served the same role as Dr. Yumi as Tetsuya's advisor in battle. With the Great General of Darkness's defeat, Great Marshall of Hell attacked, with the Science Fortress Laboratory suffering major damage. Koji and Sayaka came back with stronger versions of their giant robots to help out. Kenzo and his sons decide to finally meet after a very long time. They spent much time together (which made Tetsuya jealous) until another attack by Hell killed him. Kenzo was avenged when Koji and Tetsuya worked together to deal the finishing blow to Hell with Z and Great.

The 'Ken' in Kenzo means sword which can be used to connect Kenzo to Tetsuya Tsurugi since Tetsuya's family name is an older way of saying sword. 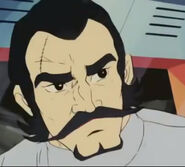 Kenzo doesn't appear to be a cyborg during this flashback