Jun Hono (炎ジュン Honō Jun) is one of the main characters of Great Mazinger. She works in the Science Fortress Laboratory as the pilot of Venus A. Kenzo Kabuto adopted her a child and has trained her ever since to fight against the forces of the Mycenae Empire.

Jun is a tall young woman with a well built body and dark skin. She has long black hair, thin eyebrows and expressive eyelashes. Accordingly to Boss, Jun is very attractive and charming. Her usual outfit consists in wearing a yellow shirt with vertical orange stripes, a white skirt, a red belt and long white boots. As her pilot suit, she wears a red bodysuit with white padding and a helmet.

Jun was left in an orphanage after her parents lost their lives as a result of a unspecified battle.[1] There, she was bullied by the other kids and excluded from play groups for being biracial.[1] She used to have a friend named Shinichiro Ikuta, but they lost contact during the years. The boy once jumped after Jun to save her from drowning.[2]

Eventually, she was found by Kenzo Kabuto who adopted and trained her to face off against the Mycenae Empire as Venus A's pilot. It's mentioned several times during the series she and Tetsuya grew up together, however, it's unclear when they first met or even if they were in the same orphanage as neither of them appears in the other's childhood flashbacks.

Similar to Sayaka Yumi, Jun is tomboyish, occasionally shouting off or hitting people that annoy her (like Boss); but has shown some feminine qualities such as an interest in fashion. She has also shown compassion and caring feelings, especially to Tetsuya and Shiro.

Compared to the other pilots, she is very mature and rarely disobeys orders. However, much like them she seems to take much joy in her job as a pilot.[3]

Despite being an overall upbeat person, Jun is still troubled by her past including the loss of her parents and the racial bigotry she suffered. In one instance, while feeling insecure about her appearance, she scrubbed her skin until it bleeded and tore a picture of her biological father.[1]

Jun has a deep amount of respect for Kenzo Kabuto as her adopted parent as well as her commander. Save for one instance,[1] Jun doesn't disobey his orders and deploys as soon as she is able to. When she was saddened because of the color of her skin, Kenzo was quick to figure out something was amiss with her although Jun tried to play it off.

She suspected the nature of his relationship with Shiro early on after realizing how distraught Kenzo was after the boy was kidnaped by Barubari.[4] When Shiro was upset with him for hiding his identity, Jun comforted Kenzo and assured him Shiro would forgive him with time.[5]

She also bonded with Kenzo's son Shiro Kabuto, acting as an older sister for him. Compared to Tetsuya, she a bit more understanding of the boy. Jun was the one who had the idea to have Shiro living in the Science Fortress Laboratory as he was feeling lonely in the Photon Power Laboratory without Koji and Sayaka around to make him company.[6]. When he wanted to go out to train with Boss, she offered to go to look after him as Tetsuya judged it to be to dangerous for him to allow only the two of them to go.

Jun also worries about the way he develops. She shows to not want him to spend much time around Boss[6] and advises Shiro to try not to depend too much on others.[7]

Jun has been together with Tetsuya since childhood, becoming his closest friend. The two get along very well and do their best to support each other. Although his sometimes brash attitude doesn't seem to bother her, it once made a argument to break off between as Tetsuya thought Jun wasn't taking their job seriously enough.[8]

Being a relatively more agreeable person than Tetsuya, he tends to asks her to deal with whatever issue comes their way whenever he doesn't feel like deploying or thinks the job isn't worth Great Mazinger's time.[9][10][11] Jun herself doesn't hesitate to sortie with Venus A be it to deal Warrior Beasts or partake in more ordinary affairs.[9][12]

Although the two of them end up married by the time of Mazinger Z: Infinity, they aren't shown to have romantic feelings for each other during the original series. Kenzo - much like Tetsuya does in the manga - describes their relationship being more akin to one between siblings.[13] However, their overall closeness and a few moments like the two of them playing on the beach[4][14] and holding hands as Jun comforts Tetsuya could be interpreted to suggest otherwise.[15]

From their first meeting, Boss makes no secret of his attraction towards Jun.[4] Boss' multiple attempts to win her over annoy Jun more often than not, especially when he uses Bakarasu to give her messages, but she does humor him with praise for his efforts from time to time.[6][16]

Boss always jumps on any opportunity to help Jun. Although she usually benefits from his help, he does get in her way sometimes. During Venus A's first battle, Jun could have won single handedly if Boss hadn't gotten in her way. [3]

Jun's childhood friend from the orphanage. He once tried to save her from drowning after Jun fell into a river.

After Koji and Sayaka depart to study abroad, Tetsuya and Jun fill their roles as Japan's defenders. Using Venus A and Great Mazinger, they go on to fight the Mycenae Empire and their various Warrior Beasts.

During the battle, Jun reencounters her childhood friend Shinichiro Ikuta after years apart.[2] He has become a biker who doesn't seem to have much purpose in life. Seeing how he turned out, Jun tries to give him advice, but her attempt backfires. Wanting to make a difference, Shinichiru asks Marquis Janus to take him to see the Emperor of Darkness as he wants to persuade him into stopping the war. Shinichiro ends up being forced by the Mycenaeans into becoming a Warrior Beast as requirement to act as their peace emissary. After realizing the peace offer was a ruse to distract Jun and Tetsuya, Shinichiro rebels and ends up getting killed after the bomb planted inside him by the Mycenaeans explodes.

Following Koji and Sayaka's return, all pilots join forces to defend against the Mycenae Empire's final attack. After the battle, Jun is last seen comforting Tetsuya as he grieves for his role in Kenzo's death.[15]

Ten years after the events of Great Mazinger, Jun has married Tetsuya and is pregnant with their child.

The movie begins with she and Shiro taking a train to visit the new Photon Power Laboratory. There, Sayaka takes them to see the newly discovery Infinity. Jun realizes there's something bothering Sayaka and asks her about it. She reveals her relationship with Koji hasn't progressed. After they are introduced to LiSA by Koji, Jun takes him aside to give him advice about Sayaka but quickly receives a call informing Tetsuya went missing while fighting the resurrected Mechanical Beasts. That's when Count Brocken and his Iron Cross army attack. Jun and the others manage to escape only to realize the city is being attacked by Dr. Hell's forces.

After the battle is over, Jun tries to sortie in Venus A to rescue Tetsuya, but her attempt fails as her belly makes her unable to reach Venus' pedals. She is then arrested for boarding the robot without permission and is taken to a holding cell. Sayaka visits Jun and assures her they will rescue Tetsuya. Shortly after, Jun goes into labor and is taken to a hospital.

At the end of the movie, Jun, Tetsuya and their baby are present when Sayaka arrives to see Koji in his hospital bed.

Jun was trained from a early age in combat. As a result, she has impressive physical prowess and acrobatic skills. Her feats include dodging gunfire [3], fighting off multiple Mycenaes at the same time[17], easily disarming a mind controlled Boss[18] and holding her own against Tetsuya during training[19].

Although she isn't as effective as Tetsuya, Jun still good enough of a pilot to use the Venus Scrander effectively in battle without prior testing[20] and being able to hold her own in most battles.

She is also skilled with a motorcycle. In the short period of time when Venus A wasn't ready to be deployed, she faced Warrior Beast using only her bike or Tetsuya's Jet Bai.[4][6]. Jun was also shown to be able to knock down multiple enemy bikers using her skills with her own motorcycle. [2] 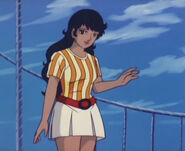