General Hadias resembles a gigatnic skeleton wearing a ragged cloak and an upside-down skull for a head. His true face is located on the left side of his chest. Strangely, he always seems to be raising his left arm which also contains a head.

As shown through the actions of his army, Hadias is one of the more sadistic and psychologically intimidating members of the Empire, second only to the Great General of Darkness; using fear and self-doubt to his advantage.

Hadias uses a scythe in battle, both in close combat and as a thrown projectile. He can also throw his legs and head, the latter seems to be guided for more precision. He possesses powerful psychic abilities that border on sorcery. He mainly uses these powers to make their opponents live their worst fears. In the manga, the head on his left arm can breathe fire.

Hadias did not appear as much as the other generals did, he often appears when his Warrior Beasts are sent out to battle. In the final battle against the Mazingers, Hadias was swept off his feet by the Mazinger Z's Rust Hurricane. Using his scythe to hold onto the ground, Hadias crumbled into dust from the corroding particles in the Mazinger's attack. In the anime's final battle, while Mazinger attacked the Demonika, Hadias appeared to stop him, throwing his scythe, legs and head at Mazinger. He is split in half and blown by the Rust Hurricane crashing down on the Demonika, killing him.

Hadias comes from the Greek God of the underworld, Hades. 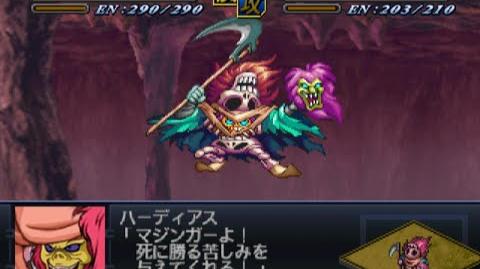