Mazinger Z Episode 75, The Finishing Blow! The Mecha-Beast Gorgon (Unfinished)
Mazinger Z Episode 76, The Lover Of The Century, Diana A! (Debut)
Diana A (ダイアナンA Daianan Ēsu) is the second giant robot Sayaka Yumi piloted in the anime after Aphrodite A was destroyed in battle. While Diana A is stronger than Aphrodite, she was still designed as a sign of peace; and had little offensive weaponry.

Diana A does not appear in the original manga. Instead, Venus A is the one to replace Aphrodite A after the latter is destroyed. She does however appear in the non canon Great Mazinger manga.

Diana A is given a frame more similar to Mazinger Z and Minerva X, featuring a more humanoid face colored pink with a light purple crown. Her torso is colored different shades of blue while her joints are colored yellow. On her chests are a pair of light pink tipped missiles.

Compared to Aphrodite A, Diana A is made of a stronger Super Alloy Z, having more defense and strength than her predecessor. Despite this, she often suffers more damage than the Mazinger Z. 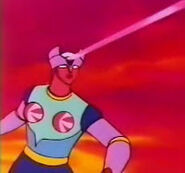 When Aphrodite A was destroyed after the battle with Harpia Π7, Sayaka became severely depressed. Feeling for her, Gennosuke Yumi decided to collaborate with the other scientists to create a stronger mecha. Sayaka was delighted to be able to fight again, especially with better weaponry. For the rest of Mazinger Z, Sayaka used Diana with Mazinger Z and Boss Borot to fight against Dr. Hell's Mechanical Beasts, including the final assault on Dr. Hell's island fortress. With the Mycenae Empire attacking, Sayaka tried to help Koji with Diana but the wounds from the last battle kept them down. Badly damaged, Sayaka goes with Koji to America to improve upon the design and study. In the final battle against a revived Dr. Hell, now Great Marshall of Hell; Diana A and her pilot returned stronger than ever dealing with the armies while the Mazingers finished off Hell.

Diana A is named after the Roman goddess of the hunt.

Diana A in the TV Magazine manga

Diana A at the end of Great Mazinger

Diana and Venus with Boss Borot 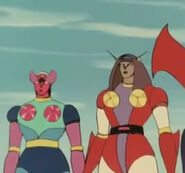