Boss Borot  (ボスボロット Bosu Borotto) (official name Boss Robot) is a giant robot that primarily serves as comic relief. He was created when Boss kidnapped the Three Scientists to build him a giant robot to compete with Mazinger Z. However, due to being made of scrap metal, he was unable to come anywhere close to the performance of Mazinger Z. Boss is his main pilot, but Nuke and Mucha occasionally operated Borot in his place.

Boss Borot is controlled by a steering wheel from a large dump truck. In terms of durability, Boss Borot is very weak, usually breaking apart very easily from an enemy attack as it was constructed from scrap metal. It has shown a decent amount of strength, able to drag the Mazinger Z and Diana A out of a pothole. Though it fights alongside Mazinger Z and its allies, Boss Borot does not have the same weapons commonly associated with members of the Mazinger family. Instead, Borot primarily uses a combination of basic physical attacks, its high amount of strength, and occasional use of impromptu weapons. However, Borot's main weapon is Boss's dedication to his friends and his willingness to stand up to vastly superior enemies. Boss and his gang enter through the slits on the mouth of Borot since there is no cockpit. The inside of Borot is rather hollow and a lot of people can fit inside with a large assortment of household items including a bench, tatami mat, a clock, a gas stove, a Japanese style toilet, a switchboard with a radar screen, a vacuum cleaner in the mouthpiece of Borot, a refrigerator door, and a TV where the pilots can communicate wirelessly with the Photon Lab.

Jealous of Koji Kabuto always being the hero, Boss came up with a plan to make his own giant robot. He and his gang abducted the Three Scientists and forced them to build them a giant robot. Unfortunately, the scientists didn't have much to work with and the best they could do was make a giant robot made of scrap metal. Boss dubbed his new robot, "Boss Borot" after his own title and went in to save the day. But this would hardly ever happen, the robot was not all that strong and it had to be saved countless times by the Mazinger Z and its female companions. Nevertheless, Boss would continue to use Boss Borot despite its flaws and in a stroke of luck actually succeeded in destroying two Mechanical Beasts, Serpenter I6 and Blacker F2. However, Boss learns to respect Koji and the Mazinger and becomes a member of the team with Boss Borot on every occasion; despite usually being knocked away, captured, or badly damaged.

Boss and Boss Borot would appear in every series, assisting Tetsuya Tsurugi and Great Mazinger as much he did in Mazinger Z. For a while he even appeared to help Duke Fleed and Koji fight the Vegan Empire, while trying to imitate the flying saucers and show off.

During Doctor Hell's returning invasion, Boss, Mucha and Nuke received a newly constructed Boss Borot using the Professors' new Photon 3D Printer. Boss Borot then participated in the final battle distracting several Mechanical Beasts with a game of Baseball in order to buy the Professors and Koji time to deploy the upgraded Mazinger Z for the final assault.

Borot comes from the Japanese phrase for "crumbling" (ボロボロ boro-boro) in reference to its construction from scrap metal. 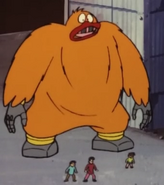 Borot at the end of Great Mazinger

As seen in Mazinger Z: Infinity 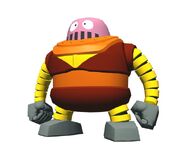 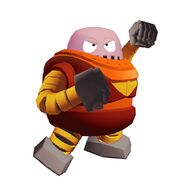