Boss (real name unknown) is a recurring character in the Mazinger series, appearing in all three primary series (Z, Great, and Grendizer). He primarily serves as comic relief and pilots the mostly joke robot, Boss Borot.

Boss has been friends with Sayaka Yumi since middle school and getting a crush on her. At school he has been a bully and formed his own gang since there were no other gangs in the area.

Boss is a large adolescent appearing to be overweight yet shows some pectoral muscles. He has brown hair and is always seen wearing an orange short-sleeve shirt regardless of the season.

Boss is haughty, arrogant, overconfident, short-tempered, and often tries too hard to be tough. As a result, he is often ridiculed by just about everyone. He does care about his gang since they are the only friends he actually had. Jealous of the fact that Koji is always with Sayaka and gets to be the hero because of Mazinger Z; Boss often tries to get attention even getting scientists to make him his own robot, Boss Borot. Seeing how difficult it really is to be the hero, Boss learns to respect Koji and the rest of the people at the Photon Power Laboratory and becomes a friend and supporter to them. Even then he still tries to help whether for a good reason or just show off, often messing up in the process. Oftentimes however, he gets little respect from his peers when something goes right for him.

Boss' gang at first composed of him, Mucha and Nuke, his only friends at the time. Boss is as loyal to them as they are to him, in the anime however Boss had a pet crow act as a lookout. Later in Great Mazinger, Bakarasu and Shiro Kabuto join where Boss treats them well despite their annoyance at being called lackeys and Bakarasu annoying Boss often.

Boss has had a big crush on Sayaka Yumi since they have been friends for a long time and was jealous of Koji since they were dating. Sayaka however did not like the fact that Boss was a bully and just wanted to be friends with him. When Koji and Sayaka left for America in Great Mazinger, Boss shifted his attention to Jun Hono who was just as annoyed at him as Sayaka was. Tetsuya did not really like him flirting with Jun either.

Boss for most of the series tried to be better than Koji, both for being Sayaka's boyfriend and for being an idol at school. They usually fought and argued with Koji coming out on top. Boss even had Boss Borot built to outshine Koji and Mazinger Z (which did not work out). Later he begins to respect Koji for what he does and they become friends. This did not stop from trying to look better than others, he attempted to look as good or even better than characters Tetsuya Tsurugi and Duke Fleed.

While Boss often tries to be tough, he just shows himself to be weaker than people think. He is strong and large enough to grapple with foot soldiers, at least for a while and is very durable. However, Boss has little fighting skills often getting thrown around by Koji whenever they tussle. He is faster and more agile than his figure suggests, usually when making quick getaways. He is also able to survive in low oxygen areas for periods of time.

Boss drives a moped motorcycle, often riding it when scouting it but has much less skills with riding than Koji. His piloting skills are also low class as well, having bad aim and timing when attacking when piloting Boss Borot. In spite of this, Boss can still manage to pull his weight with Borot, even if most of the highlights are accidents.

Boss started out as a bully at high school and would occasionally tease or humiliate whoever came his way. Koji however, was an exception as the only one Boss couldn't beat. When Koji started getting more attention after becoming the pilot of Mazinger Z, Boss would try to get more attention than him; often humiliating himself, being beaten back by Koji, or being berated by Sayaka. Occasionally, he would act as a scout for the Photon Power Laboratory.

Boss and his gang find a warehouse full of junk one day and this gives Boss an idea to outshine Koji. Boss and his gang kidnapped scientists from the Photon Power Laboratory to make a robot from the junk. But due to the resources available being just a bunch of useless junk, the best the scientists could do was a large clumsy robot Boss dubbed Boss Borot. When a Mechanical Beast attacked Boss came in to save the day, but was quickly overpowered and had to be rescued by Koji and the others.

Realizing how hard it really is to be the hero, Boss decides to help in his own way becoming a scout but still tries to help by using Boss Borot despite its flaws, even participating in the final assault on Dr. Hell's island fortress. After the sweet victory, Boss and his gang are the first ones in the Photon Power Lab to find out about the Mycenae Empire; but everyone thought they were hallucinating from heat.

When the Mycenae do actually appear and the Great Mazinger takes over with protecting Japan, Boss reprised his role as a scout for the Science Fortress Laboratory while also taking a liking to Jun (much to her and Tetsuya's annoyance). He also pilots Boss Borot again, often helping Jun but needs to be saved by Tetsuya and Great Mazinger.

With the final defeat of the Mycenae Empire, Boss gets wind of the Vegan Empire and of Grendizer, once again trying to look good again, but just makes a fool of himself. 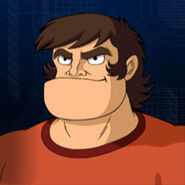 Boss as a child 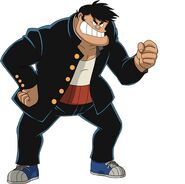