Boss is a supporting character in Shin Mazinger Shogeki! Z Hen, referred as the self-proclaimed top national delinquent of Japan, claiming to have all of the rest of Atami's delinquent gangs at his back. Much like his original counterpart, Boss sees himself as a rival to Koji Kabuto both for Sayaka Yumi's attention and to be the top man in school. He pilots the mostly junk robot, Boss Borot.

Boss's appearance in Shin Mazinger is based on his original counterpart, appearing to be overweight with black hair and eyes as well as a large chin. He usually wears a red sash with his clothes.

Boss is a haughty and arrogant show-off kind of person who wants to prove he has control of Atami, kidnapping Koji's brother Shiro Kabuto in order to prove that he's better than Koji (only be beaten down by him). He also tried to steal the Mazinger Z a few times before getting his own robot. He also gets easily infatuated with attractive women like Sayaka and Lori & Loru. Boss and his gang later gain respect for Koji and the other pilots, but still wants to prove how strong he is compared to them.

While Boss is not quite as skilled as Koji, he is a capable fighter able to defeat some of the Iron Masks in a short amount of time. Boss drives a moped motorcycle and later Boss Borot, which he is able to pilot on an adequate level, enough to fight with a Mechanical Beast.

Boss had kidnapped Koji's brother Shiro in order to challenge him to a fight. Koji effortlessly beat down Boss and his gang before he and Shiro were picked up by the Hover Pileder. After witnessing the Mazinger Z in action, Boss tried to steal the robot. However, the Pilder went to Koji before Boss and co. had a chance to get to it and the Nonakargo H2 was approaching where they decided to flee. Django then appeared to Boss and co. and forced them to help out by staying with the Mazinger and shooting shells of ice rounds that freeze the Nonakargo in place. Boss and co. then watch as the Mazinger destroys the Mechanical Beast.

Trying to take the Mazinger again, Boss and co. hide in the Hover Pilder but Koji used it to fight the Mechanical Beasts sent by Baron Ashura by combining with Mazinger. However, after the Mazinger is captured and Koji is imprisoned in the Saluud, Boss and his gang come out of the Pileder to rescue them and Sayaka. Managing to fight off the Iron Masks, they encounter the remaining Gamia Q and defeat them escaping before the Saluud exploded.

Boss stopped trying to take the Mazinger and had the three scientists make one for him, but with the supplies they had, Boss Borot was the best that could be made. Boss used the robot anyway in the final battle, managing to actually put up a good fight against the Baron Ashura Mechanical Beast in spite of falling apart, managed to redirect a missile aimed at the Photon Lab, and fought off Mechanical Beasts before salvaging the Mazinger Z. Boss and co. witnessed the Hell King Gordon and the One Hundred Rocket Punches to destroy it before seeing in terror the rise of the Mycenae Empire.

Boss and co. in Boss Borot 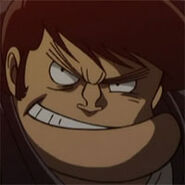