Baron Ashura is one of Dr. Hell's lieutenants, his first even. Ashura is literally half-man (left side) and half-woman (right side), as they were combined from the mummies of a man and a woman.

Before Ashura became their current self, they were originally a separate man and woman who fell in love. But their love was forbidden and when the affair was discovered, they were given a horrible fate; they were both mummified and buried alive. After many years the cave collapsed and a piece of rubble crushed the man's right side and the woman's left side. Eventually the tomb was found by Dr. Hell and the bodies were discovered. The Doctor had the bodies sewn together and named the new lifeform Baron Ashura.

Baron Ashura is one of Dr. Hell's most loyal minions, doing whatever Dr. Hell orders. They're also overconfident and careless, which can be attributed to their many losses to the Mazinger Z. When Dr. Hell begins to lose his patience with Ashura and introduces Count Brocken, Ashura does everything they can to keep the doctor's favor.

Baron Ashura's loyalty to Dr. Hell is second to none, perhaps as thanks for bringing them to life. Ashura never wants to disappoint Hell, and when they do, always attempt to make up for that mistake; especially when Count Brocken came in. When speaking to Dr. Hell their feminine voice is often used, shown as an example of being submissive towards their leader.

Count Brocken is another one of Dr. Hell's lieutenants; one that was introduced after several of Ashura's failures. Count Brocken often competes with Ashura for the position of the Doctor's right hand, often ending in disaster.

Originally, Ashura was rather intimidated by the mysterious Archduke Gorgon. However, in order to restore their honor; Ashura demands a monster to destroy the Mazinger. When Ashura died, Gorgon retrieved him and acknowledged his bravery.

As commander of the Iron Masks, Ashura sends them on most of the menial tasks of their mission. Since they are expendable and under their control, Ashura has little care of their subordinates. When speaking to them Ashura usually speaks with their masculine sided voice to assert authority as their commander.

As one of Koji's most encountered foes, Baron tries everything they can do to put Koji down. Their feud started when Ashura killed his grandfather and continued to be a thorn in Koji's side until its death.

Baron Ashura's main weapon is the rod they wield, the Bardos Wand. It is capable of shooting rays from the top of the decoration that is able to take control of Mechanical Beasts as well as shoot a non-lethal beam of energy. For a short while, Ashura also showed themselves to be very capable of using a saber.

Ashura is good tactician, commanding the Mechanical Beasts in several battles. However, because of their overconfidence, these battles often end in disaster. Compared to Brocken however, Ashura's plans are often the most destructive, having leveled cities. They also commands the Iron Masks, often having them support. Ashura could also disguise themselves to manipulate outsiders to their will, often appearing as a woman with very tempting offers.

While Ashura does not often pilot vehicles, they have been known to commander the Saluud and Bood submarine fortresses. They also piloted a few Mechanical Beasts including the Daima U5 and the Baron Ashura Mechanical Beast in the TV Magazine manga.

Under Dr. Hell's orders, Baron Ashura had a bomb explode to kill Juzo Kabuto before he could stand against Dr. Hell. However, the Mazinger Z was completed and it was piloted by Juzo's grandson Koji Kabuto. Since then, Baron Ashura commanded several of the Mechanical Beasts, with repeated failures. With Count Brocken brought into the ranks; he and Ashura often got into disputes, especially when they were paired together. However, there were some benefits such as acquiring Super Alloy Z. Eventually, Dr. Hell loses his patience with Ashura. Ashura becomes determined to reclaim their honor. They demanded a monster from Archduke Gorgon and when that did not work, Ashura charged the Bood in a failed attempt to destroy Mazinger Z. With the Bood in pieces, Archduke recovers Ashura's remains and acknowledges their bravery.

Ashura (also spelled Asura) is one of the names of Hindu power-seeking deities that are constantly in battle with the Devas but are also displayed as objects of worship. This reflects Baron Ashura's desire for power to destroy the Mazinger and fight against their own dual nature. 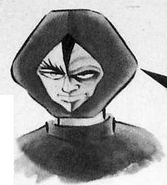