Mazinger Z Episode 1, The Birth of a Miraculous Robot

Aphrodite A (アフロダイA Afurodai Ēsu) is a giant robot created by Dr. Gennosuke Yumi with inspiration from Prof. Juzo Kabuto's designs. Unlike Mazinger Z, she was built as a symbol of peace. As such, Aphrodite A lacked meaningful offensive capabilities until she was upgraded. Aphrodite is piloted by Dr. Yumi's daughter, Sayaka Yumi.

Aphrodite A is a orange and pink feminine looking robot. Compared to her manga counterpart, the TV version has lighter colors and missiles that extend out of the chest area instead of being concealed by latches. Her head has a sharp hair-like design colored red and houses the robot's cockpit with its canopy being prominent on Aphrodite's forehead.

Originally, Aphrodite A had no weapons as she was built for research instead of combat. Her fingers being outfitted with manipulators for mining as well as having a burner on its tips for performing repairs. [3]

She has a rather weak durability compared to Mazinger Z. Initialy, her armor was made from Alloy Z being only later retrofitted with Super Alloy Z. [1] However, even after the upgrade, the metal plating appears to still be weaker than Mazinger Z's as her limbs are often blown off during fights.

She was later equipped with the Oppai Missile System which allows the breast-like Photon Missiles to be shot out. [4] Only two missiles could be carried at a time until an upgraded allowed Aphrodite A to store more ammo on her interior. The missiles are powerful enough to destroy some Mechanical Beasts if aimed properly. Besides her usual ammo, Aphrodite was capable of firing an only once used pair of larger experimental missiles which had enough propulsion to lift Mazinger high enough to attack flying enemies. No other weapons were added to Aphrodite, despite Sayaka's several requests, due to her father's desire for Aphrodite to be an emissary of peace.

Aphrodite A was built by Dr. Yumi to assist in his geological research, such as mining for and researching Japanium. When Dr. Hell's Mechanical Beasts started their attack; Dr. Yumi's daughter, Sayaka used Aphrodite to fight back but it was a losing battle. Before Aphrodite and Sayaka were defeated, Koji Kabuto arrived with his Mazinger Z and destroyed the Mechanical Beasts.

More battles with the Mechanical Beasts came and the Aphrodite did not put up much of a fight and usually suffered more damage than Mazinger, partly due to being composed of a weaker variant of Super Alloy Z. In a fight against Gelbros J3, Aphrodite managed to destroy the Mechanical Beast with the Oppai Missile System. Sayaka however, was greatly annoyed by this new armaments. Nevertheless it proved to be useful, Mazinger could even use it to propel it into the sky to take down aerial enemies. Aphrodite however would often lose limbs or be torn in half most of the time.

When Dr. Hell made a deal with Archduke Gorgon to use more powerful Mechanical Beasts, Harpia Π7 was sent after them. Mazinger and Aphrodite's backs were against the wall, and in order to save Mazinger and Koji, Sayaka sacrificed Aphrodite to save them from the monster's electrified feathers. With Aphrodite damaged beyond repair, Mazinger gave it a funeral with the Rust Hurricane. Sayaka was greatly depressed on losing the Aphrodite A and even began to hallucinate about her. The robot was replaced by the stronger Diana A.

Aphrodite A is named after the Greek Goddess of love and beauty. 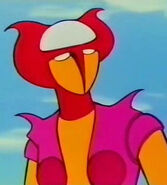 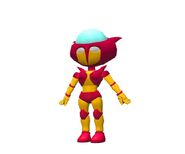 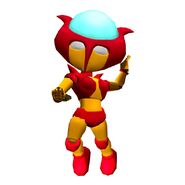